Once again, I did not get around to keeping meticulous records. There is still time to note what grew where and how well it did. I will get to it next week. But it is too late for the money factor.

The intention was to keep track of all cash laid out to make the garden happen, weigh the produce coming in, and show how profitable the enterprise is in dollar terms. Let's be honest here and admit an ulterior motive.

As Marge Simpson says: "Marriage is a beautiful thing, but it is also an ongoing struggle for moral superiority".
I was hoping to triumphantly wave the final tally in my cynical husband's face. He is being very kind about it, but if truth be told he'd rather have a wife who is less obsessed with her gardens and more into going places.

Alas. Not only are there no records this year, they might well turn out negative. Is this my punishment for being so smug about having the deer fence?

MWAHAHAHA. That maniacal laughter came from Ma Nature, the bitch. Sacred Mother my foot. She has zero interest in my survival as an individual. From Her point of view I am merely a superfluous over-aged member of an over-abundant species. Her critters have been burrowing into the garden and having a feast, see previous posts. The total yield from the garden is anywhere from 30 to 50% below what it could have been. 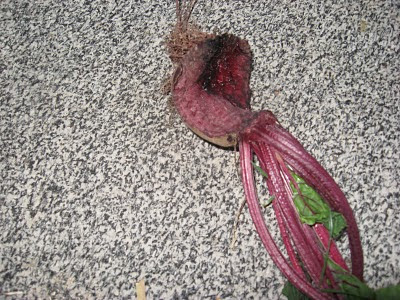 Above a poignant close-up of a vole-eaten beet, and below a clump of might-have-been potatoes. The potato vines had been chewed through as well. 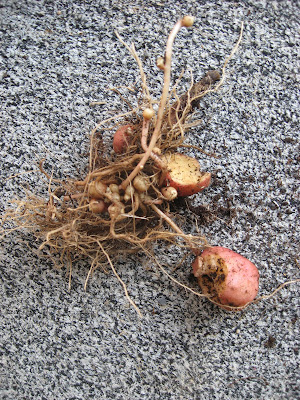 Finding vines chewed-through is even worse than finding half-eaten roots. The pea harvest was reduced by at least 30% as a result. One row of potatoes is pretty much a total loss. Now they are starting on the beans.


Anyway, when one adds up the cost of bagged manures, ingredients for COF, floating row covers, garden hoses, tools, gopher traps etc. one has to seriously question if it is all worth it. Why not let someone else take the risks and do the work? We can get vibrant organic goodies at the farmers' market.

Yet giving up has not even entered my mind. On the contrary.
Already I am working on strategies to outwit the varmints next year. More fortresses will be built! The traps will be baited at the first sign of damage! So where does this compulsion come from?

When all is said and done, I garden because that's what I do.
I might have taken up golf or bingo. I might collect expensive figurines or indulge in Manolo Blahnik shoes. Not. OK, I do buy books. But mainly I garden.

Also, I am a pagan. Nature is my connection to the divine, whatever IT may be. Growing food is a form of communion.
The true bottom line is that I garden to feed my soul.
Posted by Ien in the Kootenays at 11:23 PM