Garden infrastructure: something old and something new.

I am quite pleased with myself. No matter what else gets done this fall, next spring we will be further ahead than we were at the start of this season.

Project Raspberry is coming along. A third row is being created in between the two rows I already have at right angles to the veg beds. Many high-quality plants have already moved there of their own accord. I was dreading the digging of holes for posts. I'd either have to force my aging hips, or organize help, both a pain. Then a light bulb came on: use cement blocks made for 4x4s and just place them on top of the soil. Yes! I can DO this! The black currants can use this too, though they may have to wait till spring. 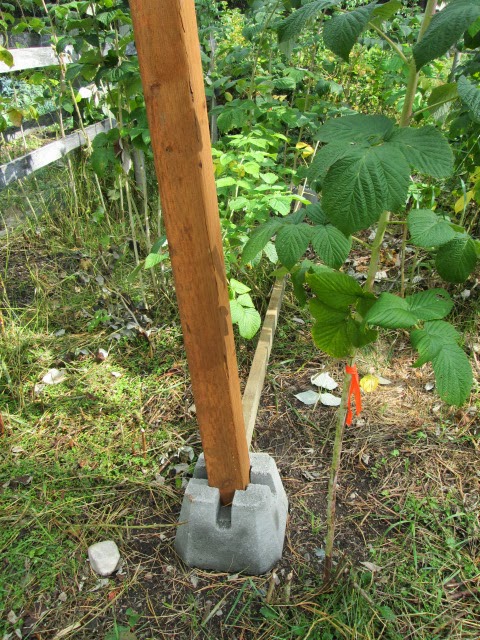 The boxes dilemma in the top garden was solved by a workable compromise: buy new short ends, and bang the long ends together from whatever is lying around. Since 4x4s only come in lengths starting at 8 feet, I had the store cut them to 5 and 3. The 3's made a perfect base for the future garlic bed. Yes, this is treated wood with toxins etc. Guess what. We are old anyway, I am so not going to obsess about it. I would not use these for the long sides and would not use them anywhere if I were feeding toddlers. 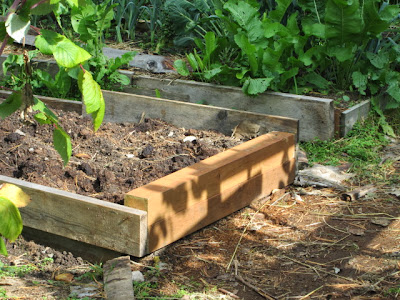 The long ends are made of 2x6 boards that used to be part of the old greenhouse, combined with some of the slabs that started the whole boarded up bed thing. It is not nice and tidy, but it works to hold the soil in place and deter the weeds. Good enough! 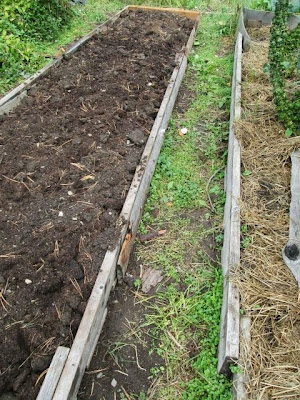 Below: board and slab detail. Board alone was too high off the ground. The overlap makes it work. 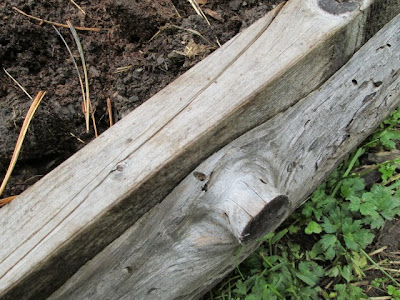 In the greenhouse on the other hand I splurged on bought 2x12s to make two 3x4 boxes. The space was dug out, lined with hardware cloth weighted down with rocks to deter the voles, then filled with sifted soil. In this small space we can aim for perfection. 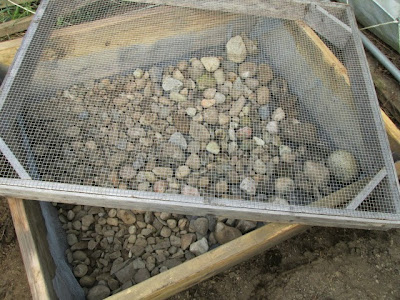 The first one took days. The second one went much faster.
This time I did not try to use the electric drill/driver bought special for this use. How-to Youtubes make it look so effortless. PRRRRT and the screws are in. Who knew that it takes major muscle power to hold those things steady? After struggling mightily in the pit with a screwdriver that would run away on me and just turn inside the screw hole, making it useless, I resorted to a rusty manual screw driver. Progress was slow but steady. I also took a tip from Erica Strauss of NW edible fame and built the second box in two sections, putting the halves together on the deck, then assembling them in situ. 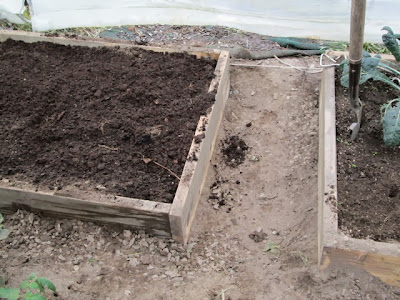 There we are, 24 square feet of enriched soil, ready for planting. Still to be added: copper coil to keep out slugs. It is probably too late for seeding anything, but I stuck in some multiplier onions and have some chard and kale that is just the right age for transplanting. Next year one of these beds will be leeks and carrots for overwintering, square foot style. I am itching to build a long 3x10 one on the left side,  but have to wait till the tomatoes are done. Let it freeze, I am ready.
Posted by Ien in the Kootenays at 11:04 AM