The Machine and I

I should have known better than to fall for the seduction of another machine. In this case, a brand new shiny red Stihl weed wacker, complete with all the trimmings. Ear protectors, safety goggles, little fuel thingies, etc etc.

In the past I have had little Mantis tillers, and once a large rotor tiller. I never liked working with them much. The main goal was to have them chop green manure into the soil, but long stalks just get tangled in the tines even with the powerful machine. The expensive tiller got damaged when the shed it was parked in collapsed in a snowy winter. It was sort-of fixed but felt even more awkward. It also suffered from fuel-left-in-over-winter syndrome. I finally sold it to a handy guy who makes use of the engine and parts.

I have also had electric trimmers. One was second hand and didn't last long. The other one was new, cord-free, and lasted about 5 minutes on our tough terrain before it would whine for a recharge. I guess those things are designed for postage stamp urban lawns made of actual grass.

But that was a few years ago. Last year in May I got seduced again. I was feeling great. The chiropractor had fixed my hip, and iron pills had revived my energy. Visions of the perfect gardens of my dear friend Beth James of blessed memory were dancing in my head. Beth didn't have a lawn mower, just a heavy duty weed wacker that she used both on her lawns and on the grassy paths between her garden beds. Beth was also a tough wiry athletic type and all-over handy woman, all things I am not.


A few days after the purchase my energy dropped again, and a bit later yet life took a very different turn. Fast forward a year. I feel better than I have in years. Time to revisit The Machine.

Took it back to the shop to remove gummed up old fuel and put in fresh, made sure it started. Smiles all around. This time I am going to DO it, right? I actually did study the thing, managed to get it started, whizzed around a little bit. Indeed, much grass can be trimmed in a short time, but it seemed the strings break off just as soon as you start. In previous encounters with electric trimmers I seemed to spend half my time untangling the spool. That's why I opted for a head with stick-in strings. Turns out you have to soak them. OK. Next time. There was tons of other things to do, and I kept postponing my next session with the Machine.

I finally admit that I am just not a machine person. I drive, but that's it. The two stroke engine and I do not get along. To choke or not, to rev but not too much.....I just don't have the feel for it.

Last week I made a casual remark on Facebook about needing an extra pair of hands. My neighbour and occasional barter-partner Rick took it literally and came over to help.
He was frustrated by the wimpy strings but otherwise loved the thing, and did a great job clearing the edges of the yard. He still owed me an hour, now I owe him one again. Barter works! 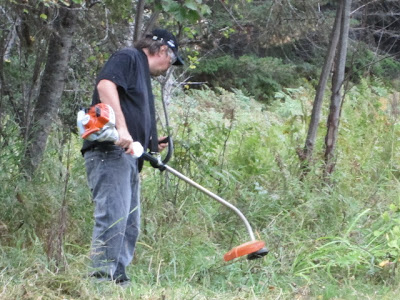 And since I am into decluttering these days, Rick took the machine home. He is a tinkerer and a machine guy. My husband is good at it too, but this thing hurts his back. Rick will come over to do any wacking that I may need in the future. Hallelujah, there is more than one way to get things done!
Posted by Ien in the Kootenays at 11:21 PM