Random notes from the year so far.

I got the pictures on a stick, which saves me the trouble of figuring out how Windows 8 organises them. So here goes, finally!

The year so far with pictures. This post is started on August 17. The day is cool and cloudy which suits me fine. 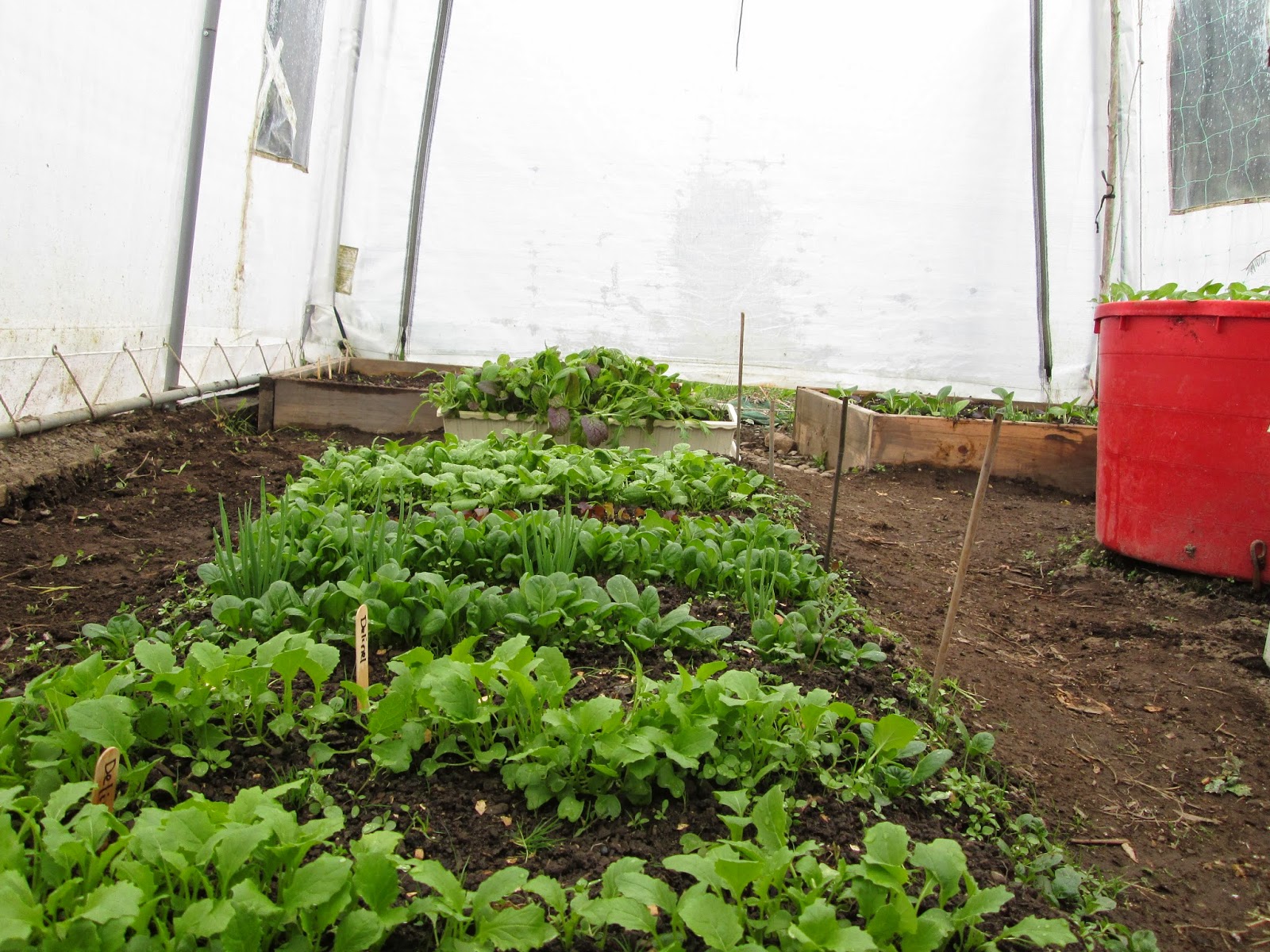 May and June this year were great growing weather, a nice mix of sun and rain. Not too cold and not too hot. Thanks to the greenhouse we were eating fresh salads in early May. For the umptieth time, I love my greenhouse! The picture above shows the abundance as of May 11. I must have done something just right with that small 21/2 by 8 ft bed. It yielded an anazing amount of food. 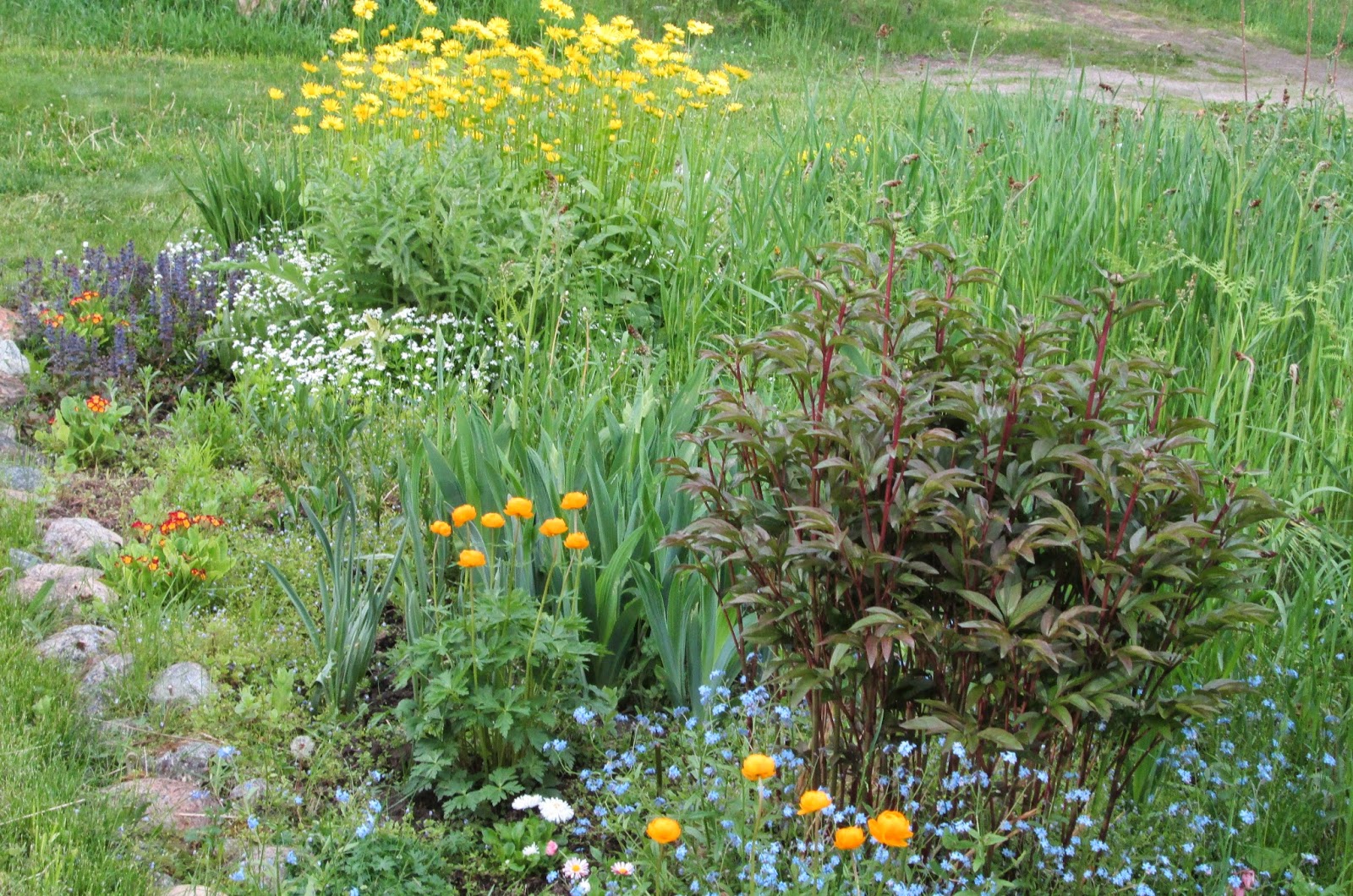 Early in the summer perennial flowers did their thing in the bed to the side of the lawn.  This is a poor picture, I had not figured out the camera's menu yet. The deer were relatively merciful.  Somehow they left the astrantia alone. 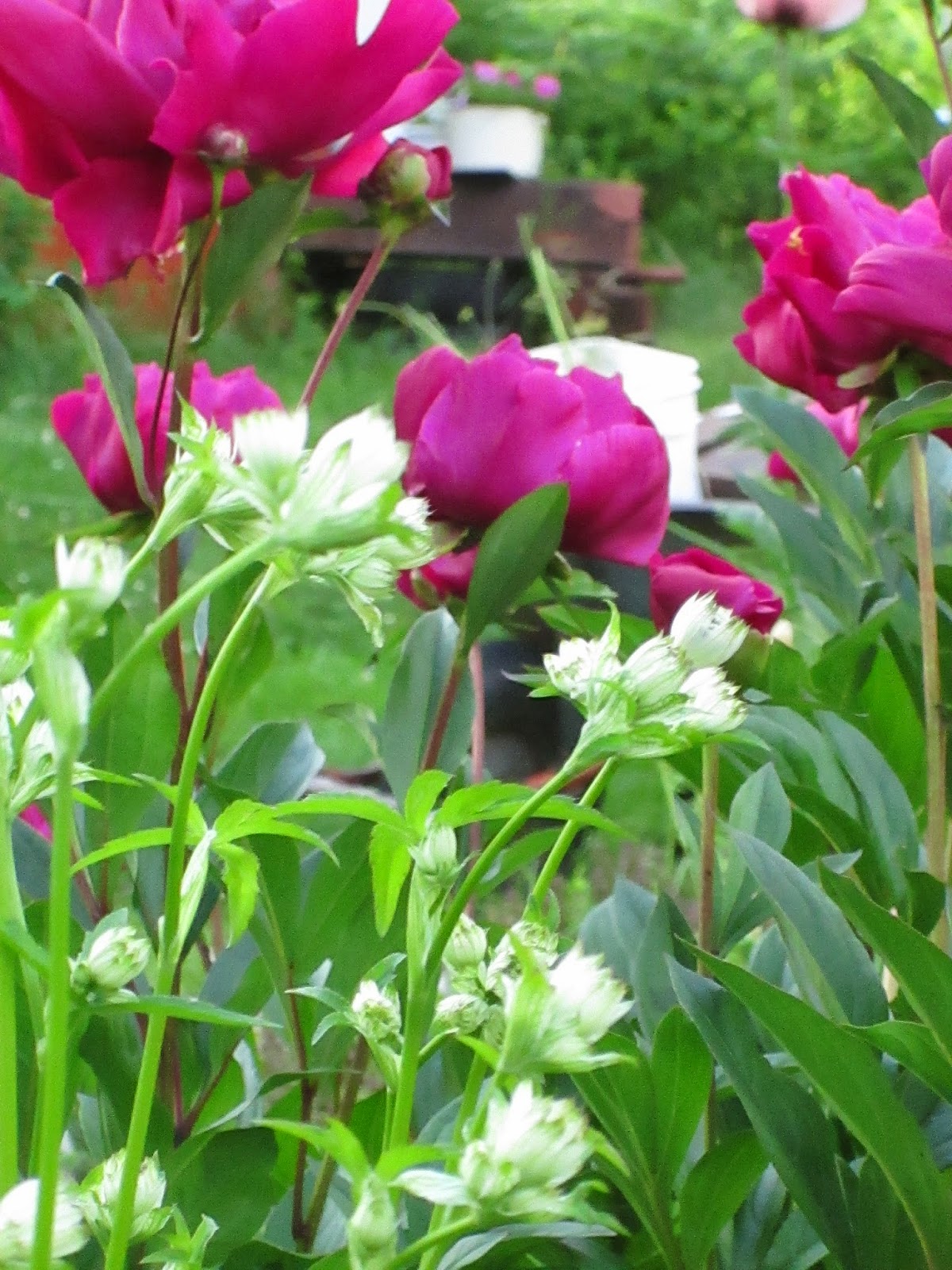 Of course I had to create some more work for myself by buying annuals to fill in the gaps. 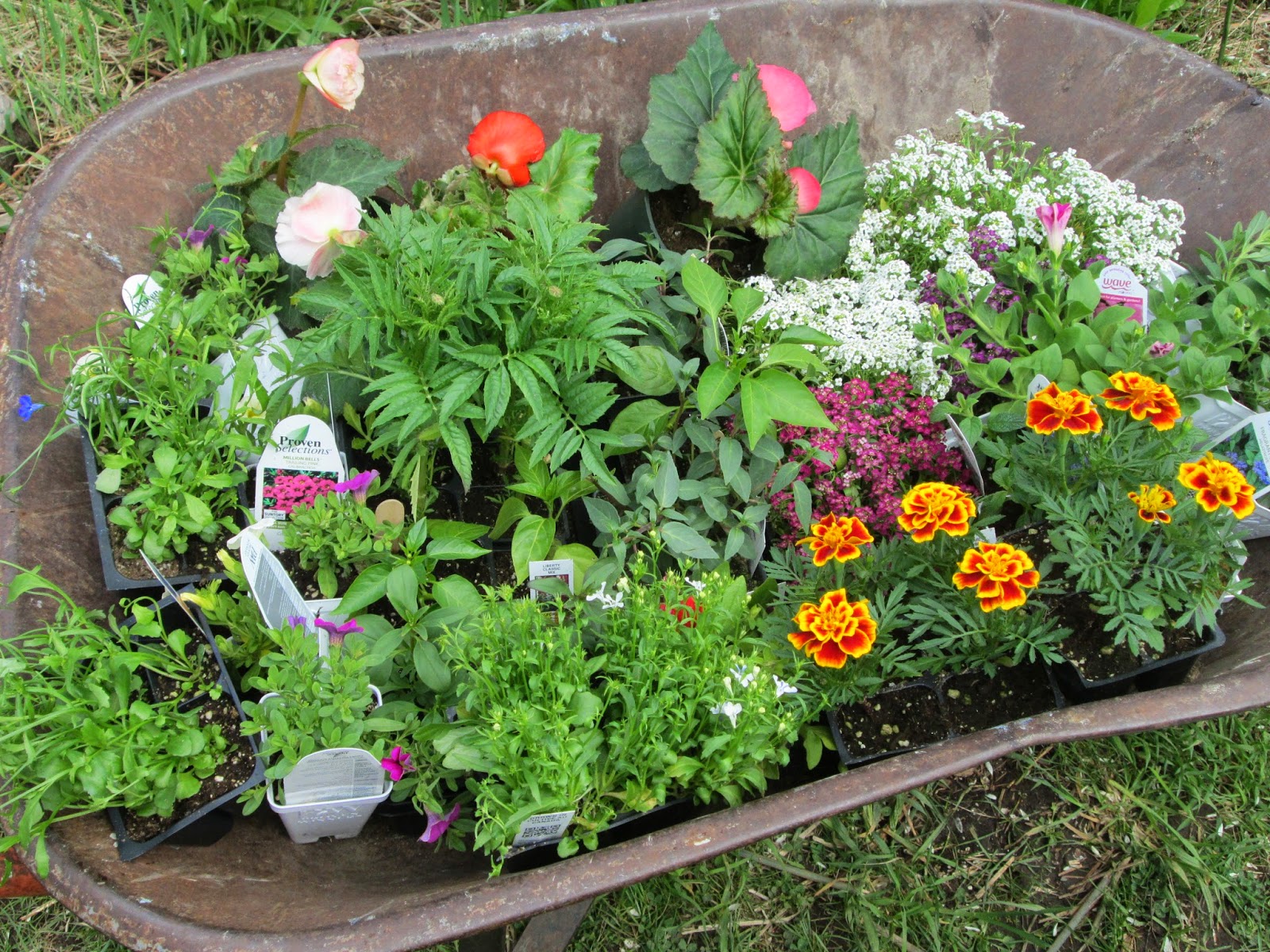 Salmon coloured poppy is always a brief and uncertain glory. It bloomed during a showery period and we never got more than a few blooms at the time. I did get this one picture I am quite proud of. 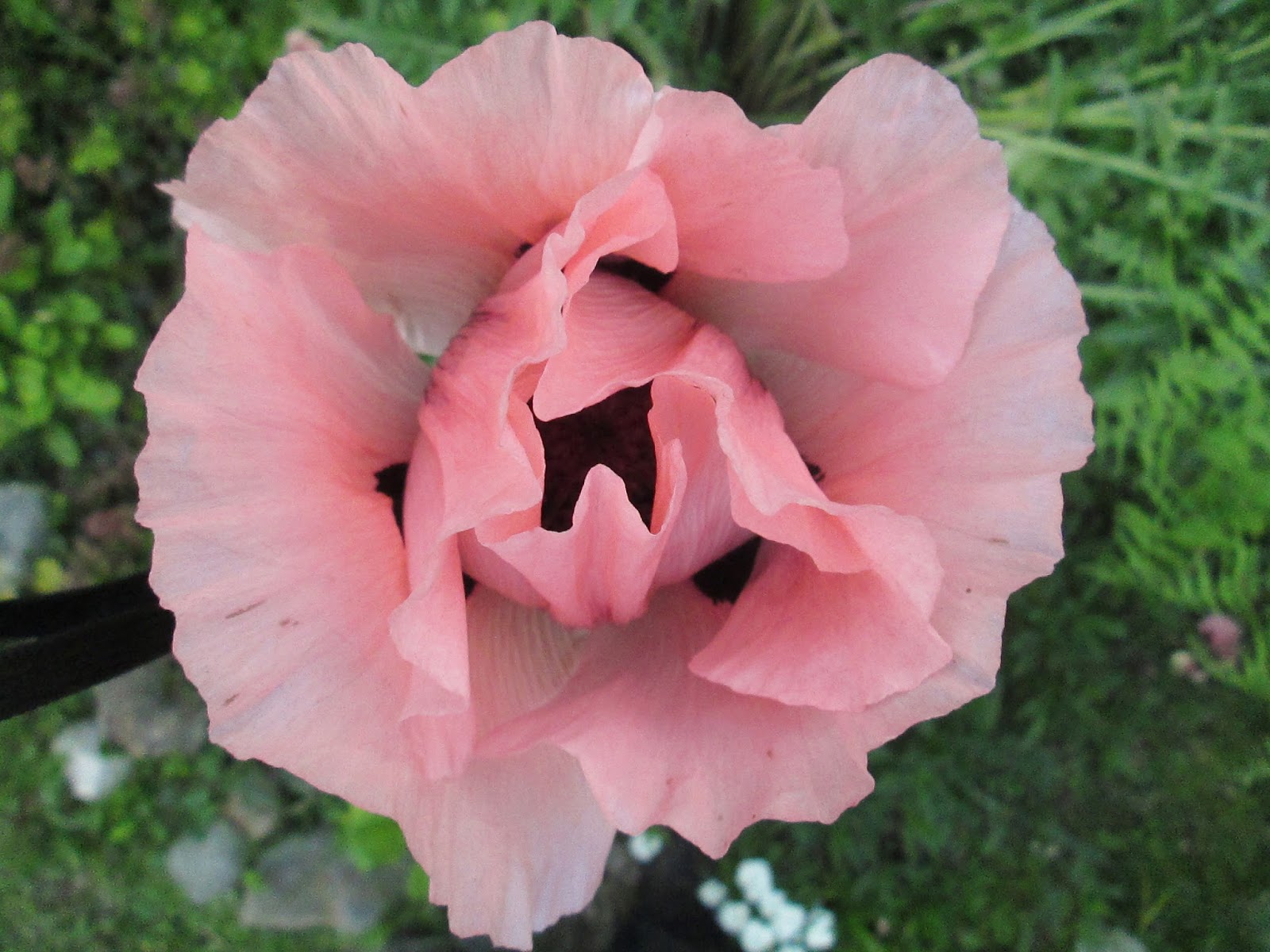 Since I am a non technical klutz I was quite pleased that I managed to remove the dull, nicked beyond repair blade from the lawnmower in order to replace it. The mower  had cut the lumpy space that passes for lawn here for almost a quarter century and was otherwise working just fine.  It turns out they don't make blades for this sturdy model any more. I went to town for a blade and came home with a new mower. It works great and is lighter, but I doubt the plastic body will last as long as its metal predecessor. Planned obsolescence, don't get me started or I'll be ranting on the insanity of the economic system for hours. 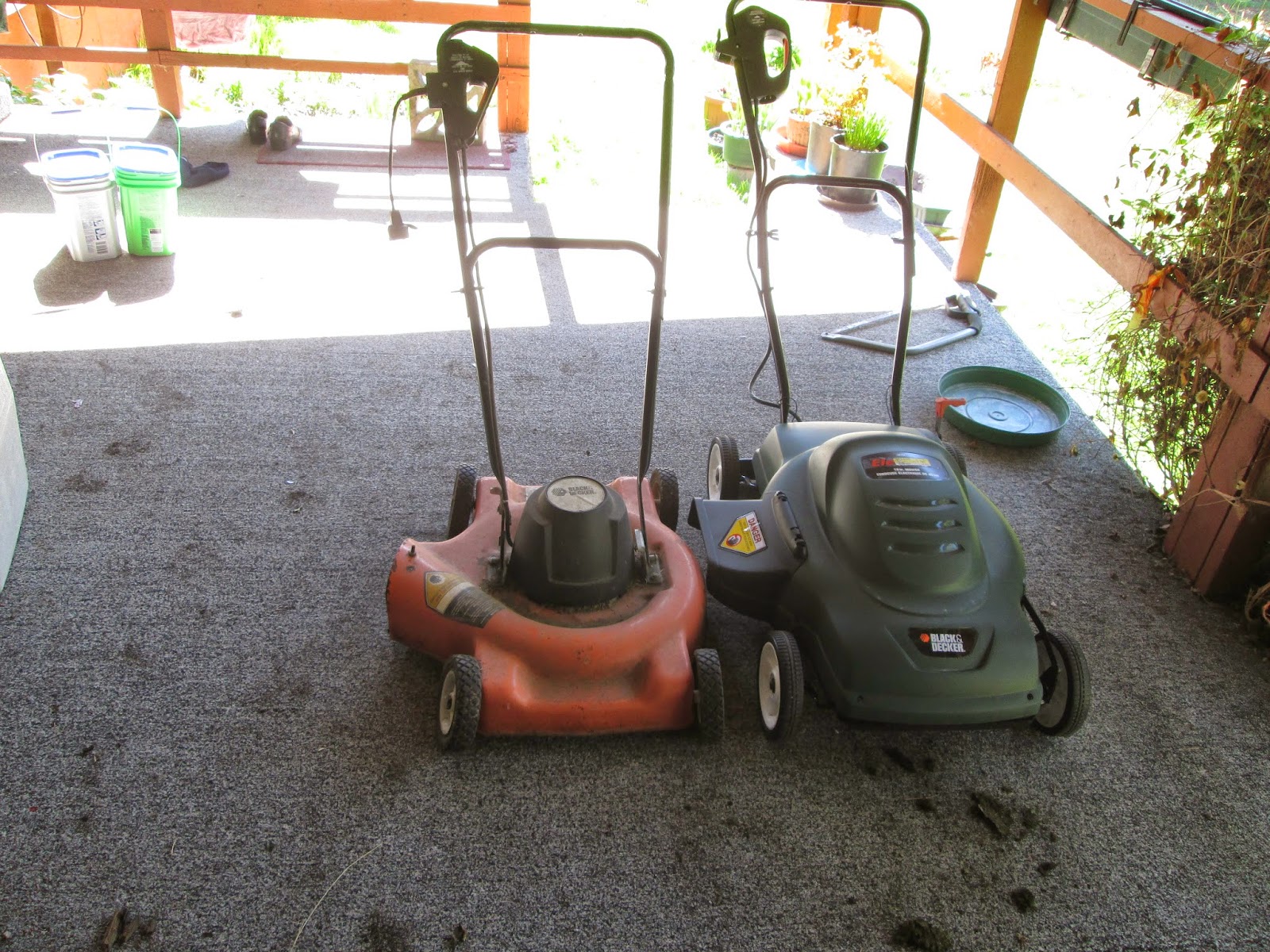 By late June it got HOT and by the second week of July we were in a nightmarish heatwave/drought that defined much of the summer. That nice blue time of early July, when the rains have stopped but summer is still young and all is lush and green, that time was cut short this year. It soon felt more like August. The valley was choked with smoke from the many wildfires, fortunately none right here. It felt scary. At the beach the water was delicious, but the atmosphere was so weird I didn't even enjoy it. The sky was white, the mountains across the lake were barely visible in the smoky haze. A hot erratic wind made one worry about the fate of the many brave souls fighting wildfires. We had one week of respite, cooler temperatures and one rainy day around the twentieth of July. The heat soon returned with a vengeance and did not abate till August  14. It was often smoky/muggy, and more to be endured than enjoyed. In spite of the many weeks of hot dry weather I feel strangely unsatisfied with the summer. I was also very busy, a mixed blessing.


It feels like September now. The trees were weakened by drought and are shedding leaves, some of the bracken is yellowing. Our Saturday market yesterday was quite wet and nobody minded, we were all so glad to see some moisture. 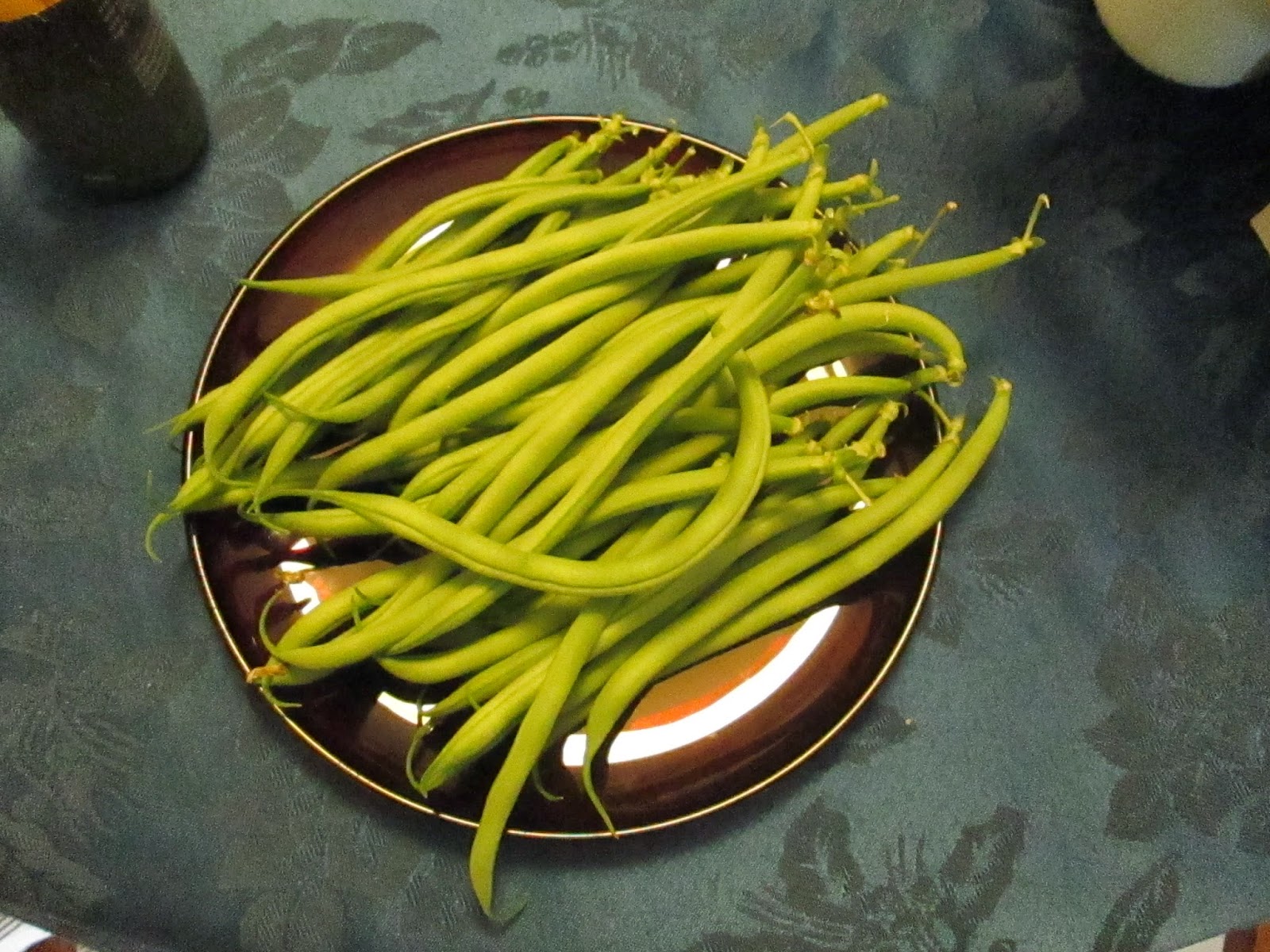 On the plus side, harvests were early too. We had the earliest green beans ever, these beauties came out of the greenhouse on July 15. I had stuck them in between the Chinese cabbages, so when those bolted the beans were well up and raring to go. Better: just pre-start them in pots. They got a bit too leggy from having to fight their way up in childhood. One smart new trick: sticking bamboo poles in between the beans, one per plant. Even a bush bean likes some support.

Continuing August 29.
Blame the Nexus 7 and the cat for the long interval. These days I spend more computer time in my comfy chair with the tablet, lap free for cat. This makes it less likely I will work on a blog post. Even my four fingered efforts on the keyboard are faster than the tap tap tap with the stylus on the touch screen and besides I have not figured out how to add pictures. 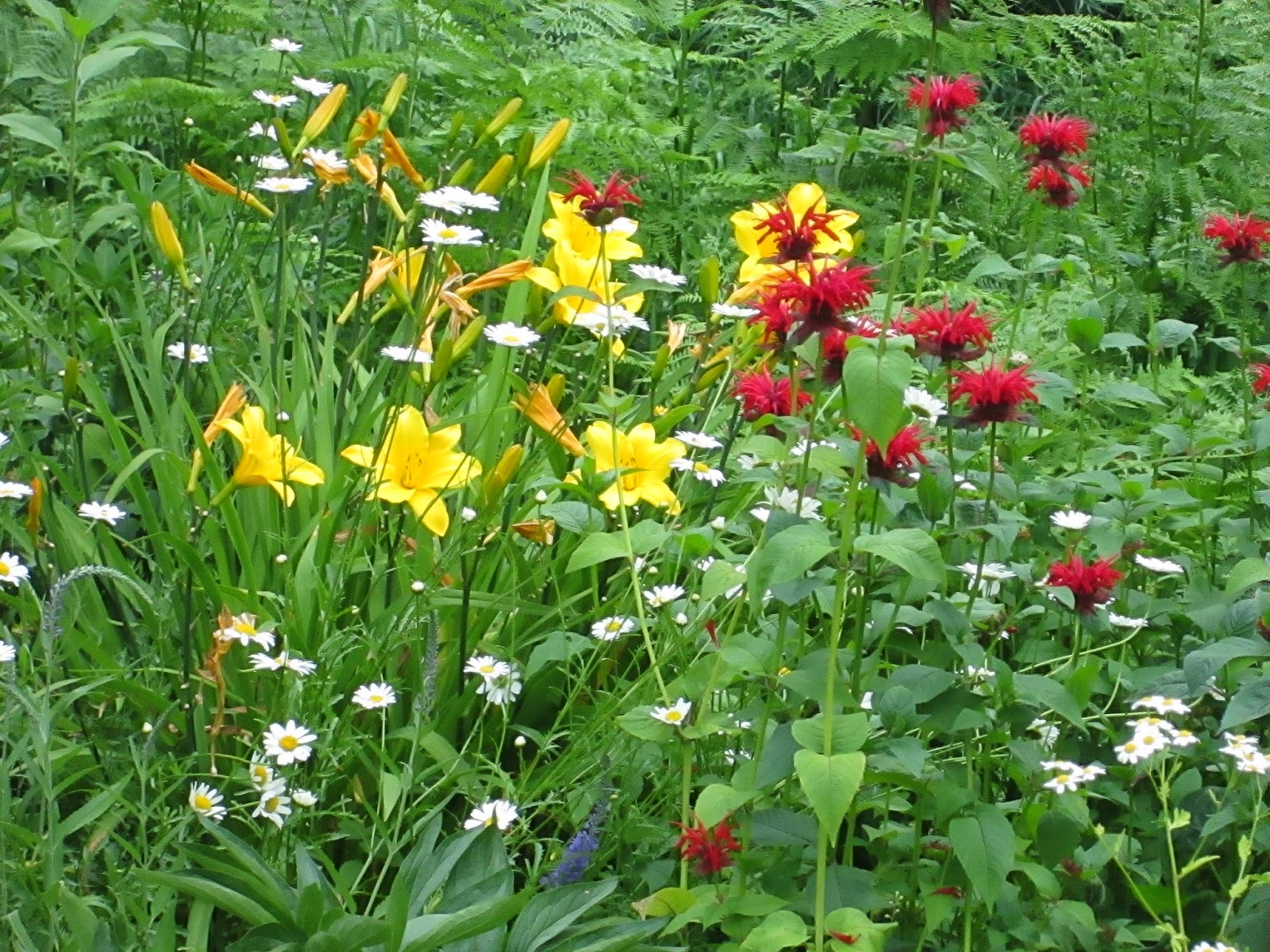 Once July was past the flowerbeds were TOAST, victims of drought and deer. The only late colour comes from the petunias, geraniums and marigolds in containers that are placed along the edge of the border and diligently sprayed with Bobbex. Plants the deer never used to touch, like sedum and golden glow, are now systematically demolished. 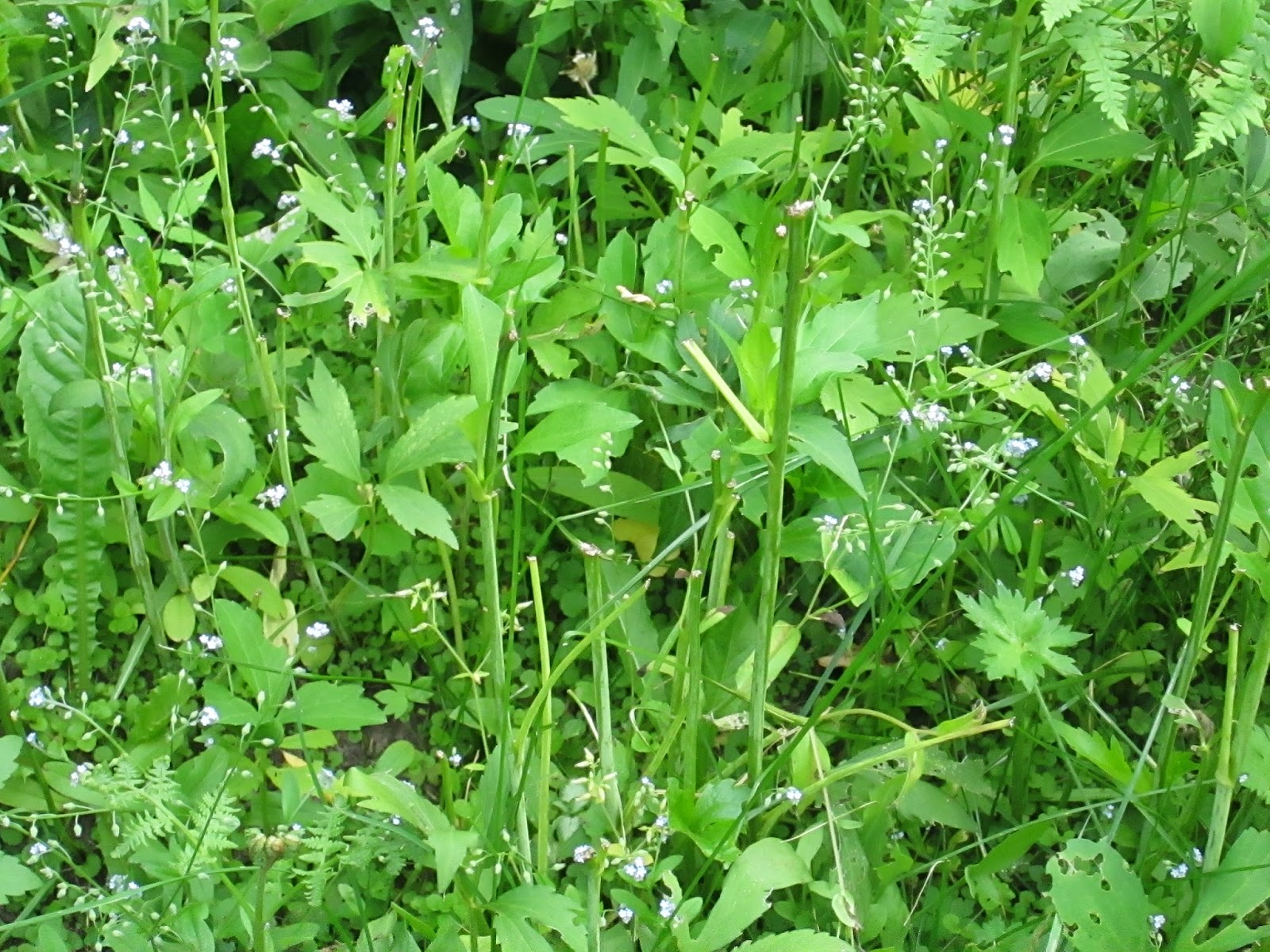 The veg garden on the other hand is starting to look decent again after an interval when I felt like a total failure. I mean, if you can't even grow zucchini, what's the world coming to? It turned out the small fruits that started rotting in infancy were suffering from blossom end rot. The same plague hit many gardens in the area, even a professional grower. Extreme heat may have played a role. I removed one plant to improve air circulation, encouraged the other three to grow in a certain direction, removed all sick leaves and stems and gave them a good spray with liquid seaweed. The temperatures also moderated. Whatever did the trick, we are finally enjoying the usual zucchini season with lots to eat and plenty to give away.
We have carrot pulp to use up for all the things that used to soak up the excess zucchini crop. Muffins, sauces, veggie patties.  Last year I dried a bunch but we did not really like them. Conclusion: consider summer squash a seasonal treat and relax. It makes no sense to let them grow beyond tiny deliciousness. 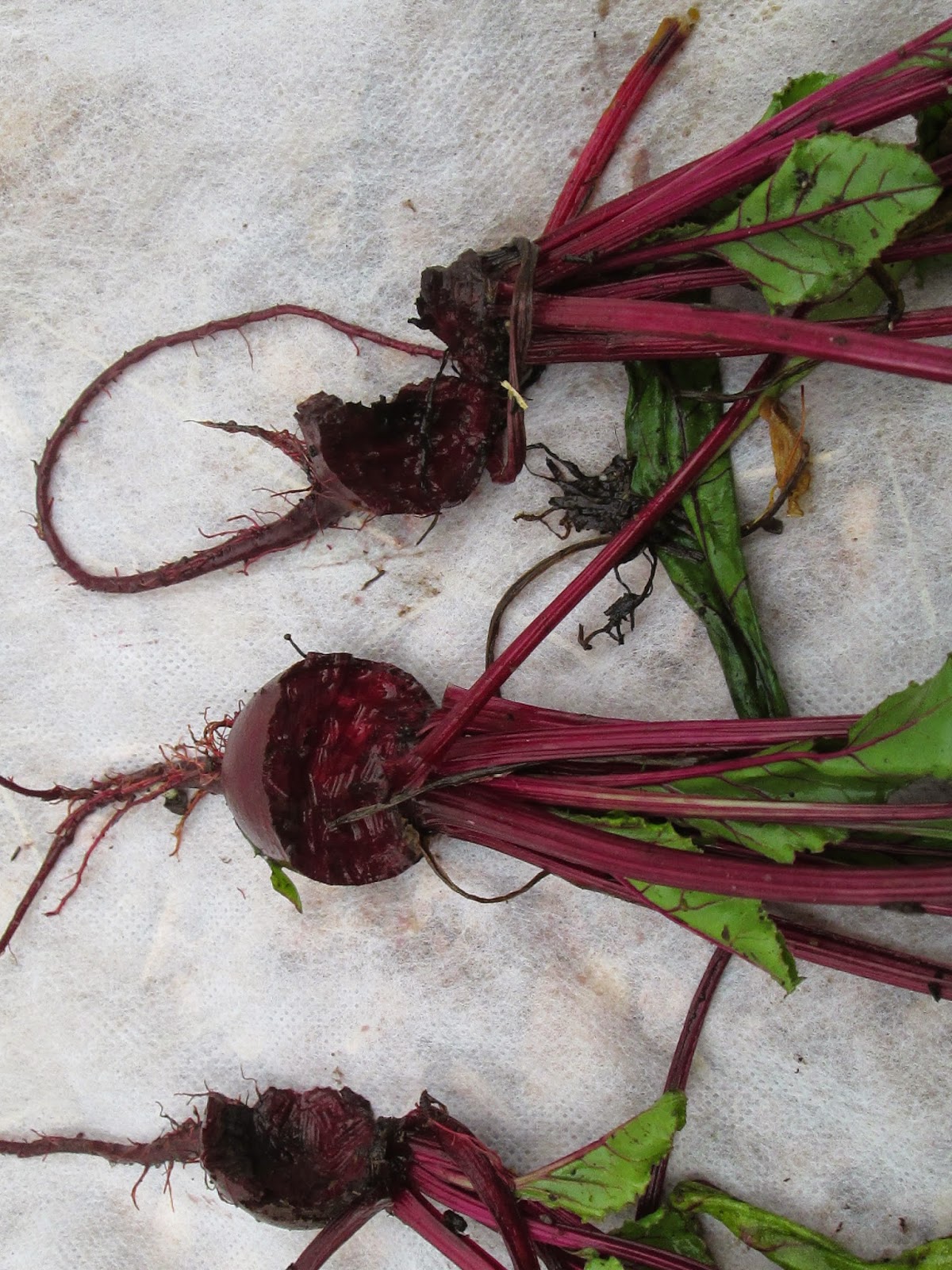 Isis Loran posted a list of questions to ask ourselves NOW, while we can still remember what was what. Good plan. I try to do that with an almost-annual Asparagus to Zucchini post.
but I love these questions, especially 4 and 6. As the attentive reader can see, the beets were eaten up again. The dastardly voles are back. I had planted lots because we juice carrots and beets almost daily.
Before they were eaten the beets were looking great, with the healthiest leaves I have ever seen. Credit goes to Steve Solomon's COF with a tiny bit of boron. The few we did get were delicious. 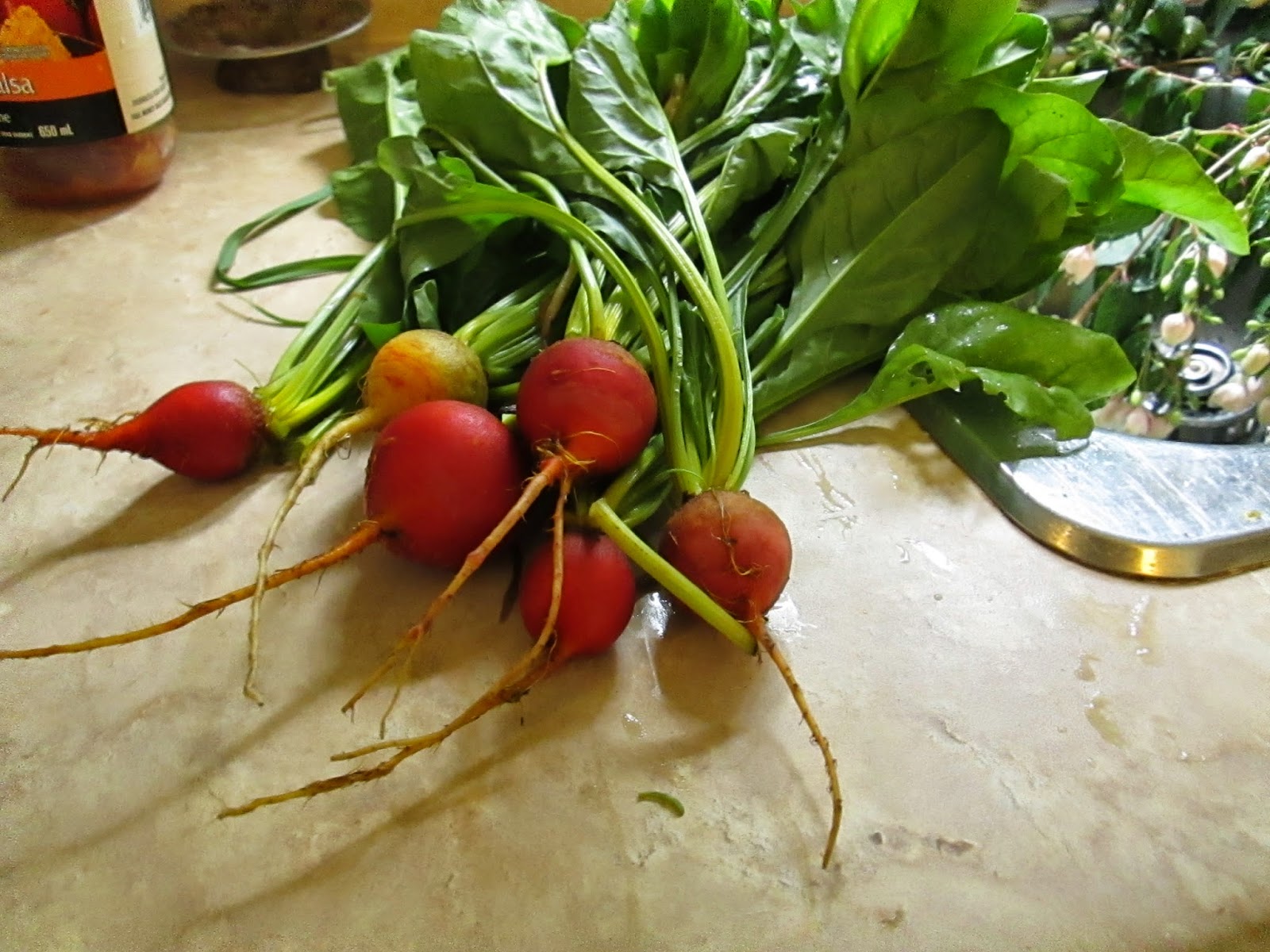 These golden beets came from the greenhouse. Could I have prevented the loss? Maybe. I could have planted them in a fortress bed, but that is what I did with the gourmet Sieglinde potatoes, supposedly a late variety. The plants started to die down quite early. When I pulled back the hay I found the vines had been chewed through. The varmints had managed to get in there. There were a lot of half eaten potatoes. Voles can JUMP and I had allowed the buttercups around the base of the bed to get too high. I saw a big fat culprit,  It took him or her a few tries before (s)he managed to jump out of the box, which gives me hope that with better weeding at the base the fortresses will hold. By the way, the few Sieglindes that we did get were delicious. Yellow, firm, waxy, will plant again. 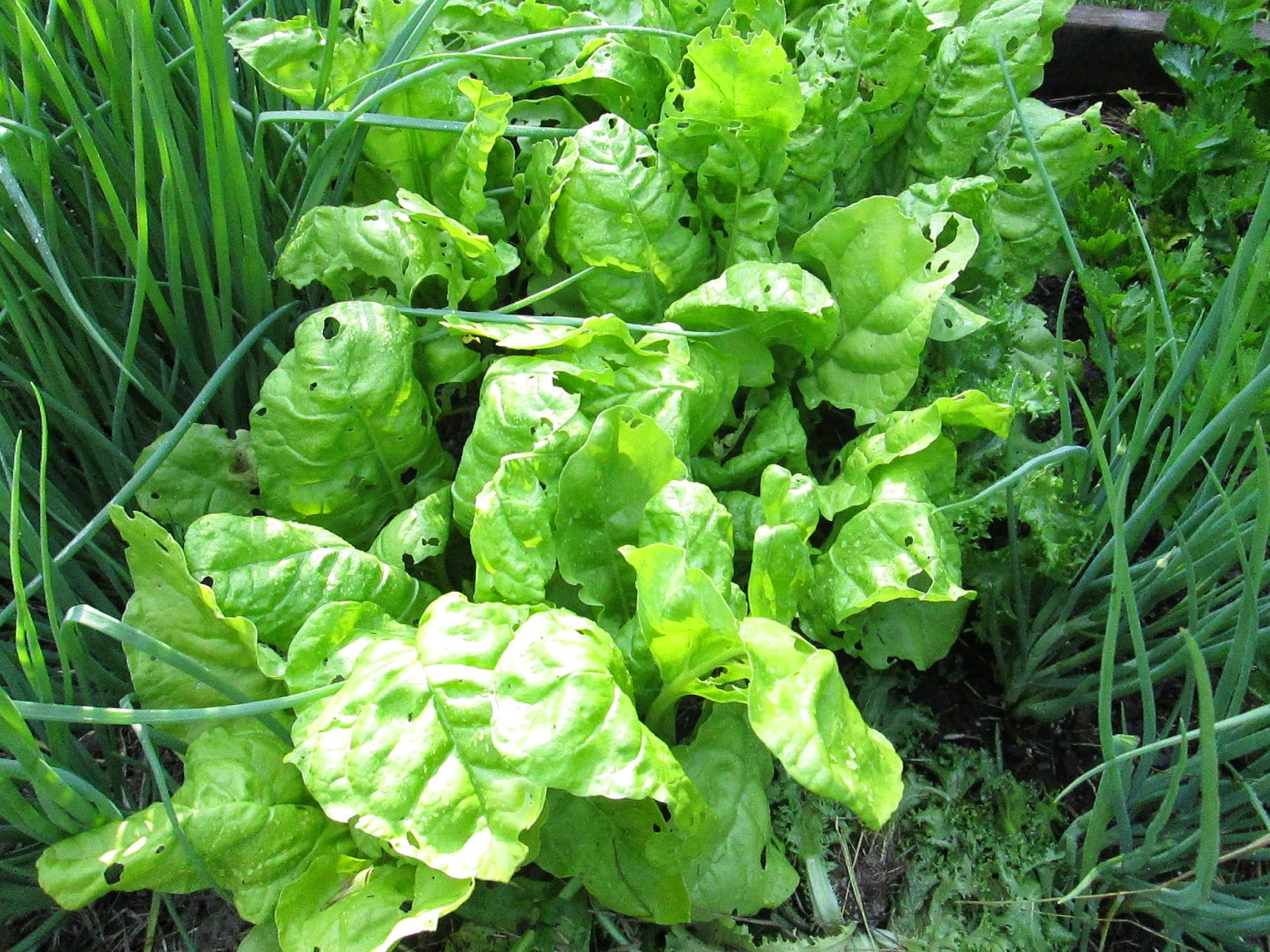 My nomination for Plant of the Year goes to Lucullus Swiss Chard. It does not look as dramatic as Rainbow chard with its many colours of stems, but is it ever delicious! It is mild and tender, without that set-your-teeth-on-edge oxalic acid quality. Much more like spinach. Since spinach always bolts here this makes me very happy. At the end of the season I am transplanting it in any gap.

Meanwhile.....it is September 19. Forget the rest of this, I might as well start on the Asparagus to Zucchini overview!
Just one picture of the flower beds reduced to containers. 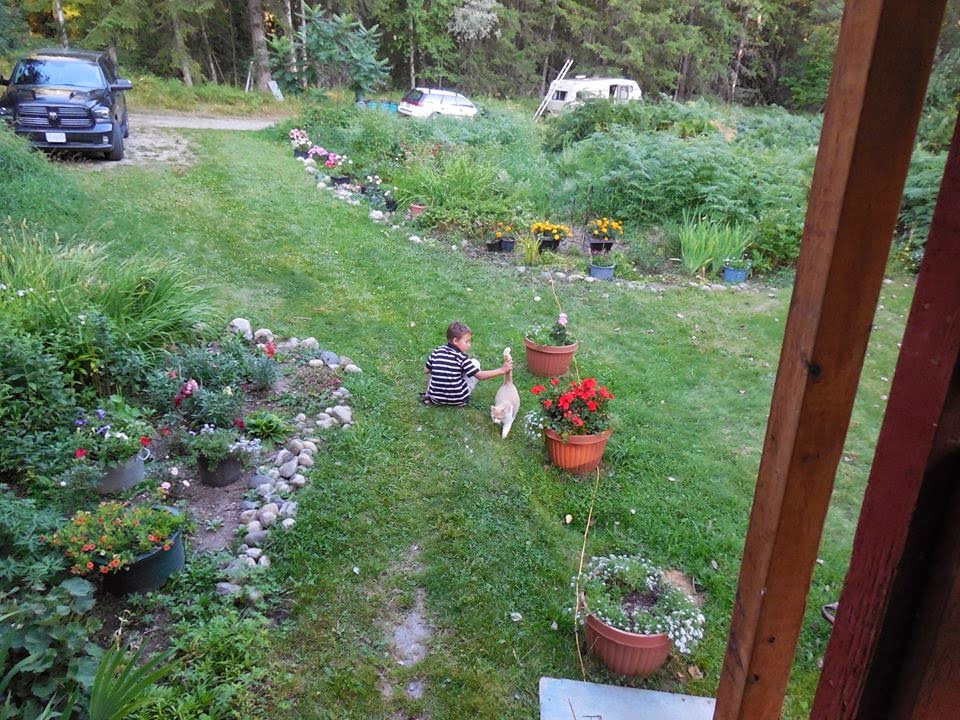 Posted by Ien in the Kootenays at 9:57 PM