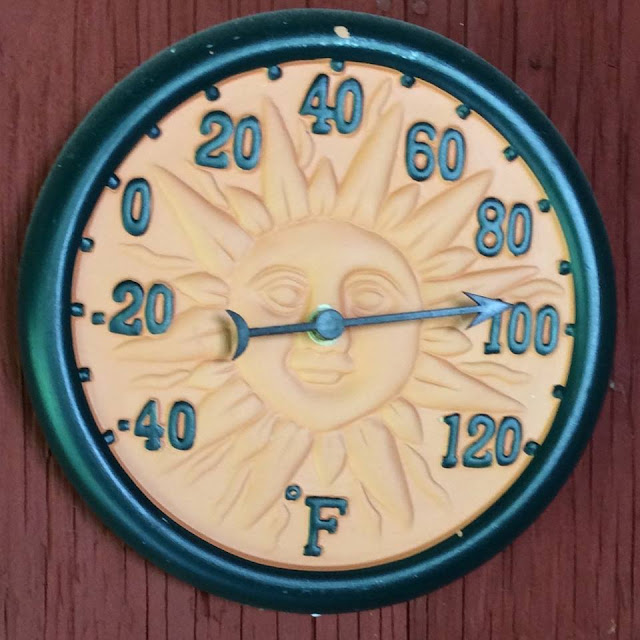 Hallelujah, it has rained! It is also much cooler, quite a shockafter months of living without so much as a sweater. For much of the last months the thermometer on the deck looked like this, in the shade. For the first time in 72 years I was tired of summer before its end.
I love heat up to the low thirties. Beyond 34C all I can do is sit in the shade and sweat.

Nature is tired as well. The lawn is littered with ugly dead leaves that fell from the drought-stressed trees in August, without turning pretty colours first. The bracken is turning. Geese started gathering in the field below in mid August. Since spring everything has been almost a month head of normal, and that seems to go for the coming of fall as well. The last week of August was the worst. The air was choked with the smell and taste of smoke from the many wild fires in B.C. and just across the border in Washington state. 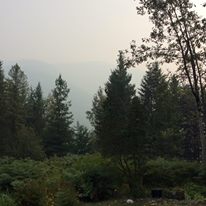 We could barely see across the field to our friendly Box Mountain, the one we see from our living room.
Saddle Mountain across the lake, our view in the other direction, was completely invisible. The sun was a red ball in the sky one could look at without hurting the eyes. People in Midway near the border reported not being able to see across the street. We all counted our blessings at being spared fires in the immediate area. The rain was welcomed but the dip in temperatures is still a shock. 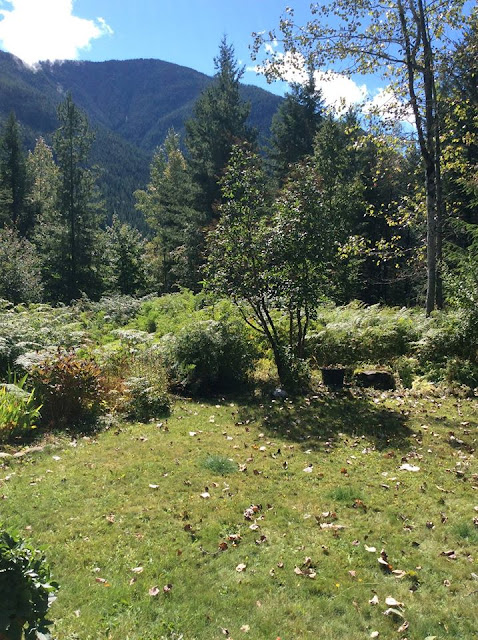 The same view after the rain. Note the bedraggled state of the lawn which has spread to everything in the flower gardens. I barely did more than harvesting and preserving for two whole weeks. The air quality was such that people were admonished to avoid exertion. It doesn't take much for a pleasant yard to start looking like a sad mess. To make things worse the rain washed off the Bobbex deer repellent. Late blooming perennials got deered earlier in the season.
By now I depend on annuals in containers for colour. 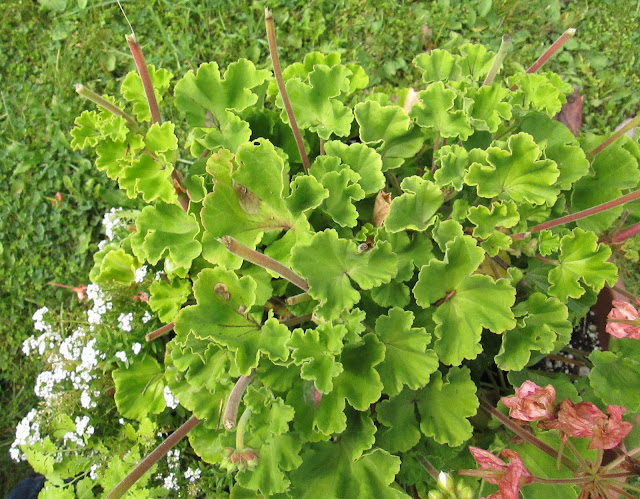 The geraniums which are my pride and joy were much enjoyed by the white tailed rats. I could spruce things up by mowing the lawn and doling out some badly needed TLC to the flowers in containers, but there are only so many hours in the day. The mornings are now unpleasantly cold and the days so much shorter.
It takes me longer to get my butt out there. Once I am going I don't want to stop.

Garden priority went to shifting gears in the food garden, from favouring the heat lovers to planting some hardy things for the fall garden.

That's all she wrote in early September. I guess I was planning to add more, never got around to it and it sat in draft. Typical. Now I wish I had hit publish before the previous one. Oh well. Record keeping is not my strong point.
Posted by Ien in the Kootenays at 10:48 AM